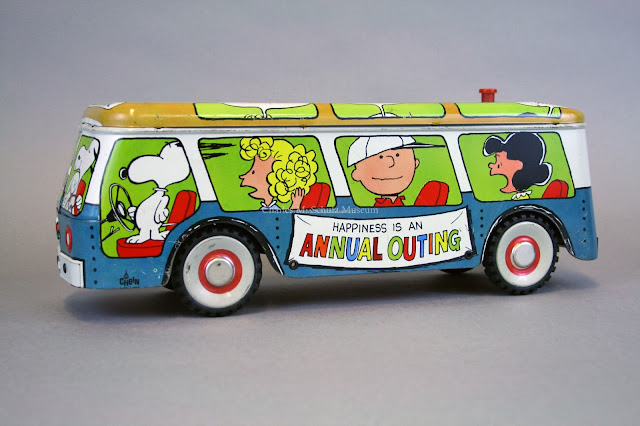 To give you a little history, between the years 1964 through 1968, I was employed as the lead designer by a rather small toy company named, “J. Chein & Company”.  The company was located in Burlington City, NJ.  I was told they were one of the two remaining pre-printed sheet metal toy manufacturers in the USA.  Their sales were lagging and they believed the cause of this lag was due to not having enough affordable plastic toys in the product line.  One of my key roles was to merge utilization of plastics more frequently in their product line.

At the time, sheet metal toys had a bad reputation of accidentally cutting children.  As a result, sales were down.  We spent a considerable amount of time reviewing 104 old and new products for faulty crimps or bent ears needed to hold the product together.  Whenever a faulty closure was discovered, the tool was pulled and immediately repaired.  During the course of this ongoing investigation, I happened across an old set of tools used to make a toy bus. 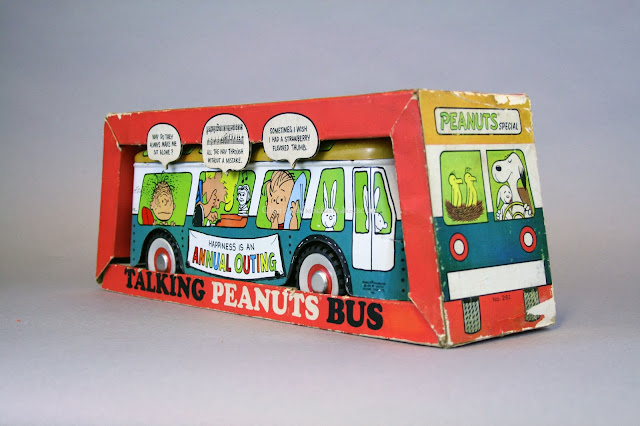 As I recall, it was 1965-66 and at that time, the Volkswagen micro bus was enjoying extensive popularity.  I owed a VW bus and was totally enchanted by it, especially on family outings traveling with wife and four children.  The thought came to mind that it might be a great idea to revitalize the old toy bus into a Volkswagen bus.  We were accustomed in using character merchandise such as Donald Duck and Mickey Mouse to aid in selling the products.  The Peanuts characters were considered timely because of the family orientation and were the most popular cartoon of the day.  I told the director of our small design department, Mr. John Cotey about my idea and he enthusiastically approved.  We contacted Mr. Charles Schulz and made arrangements to meet. 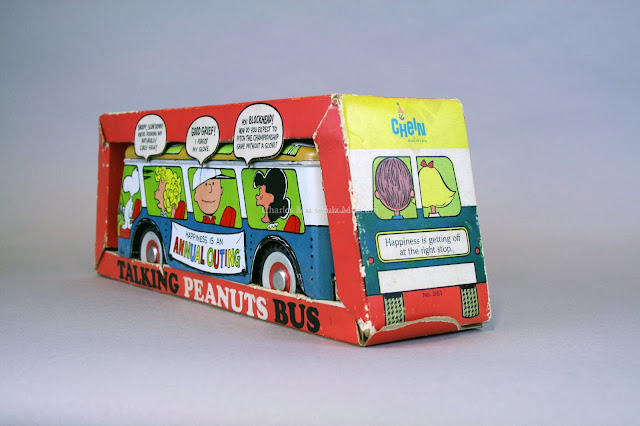 Mr. Cotey traveled to California to meet with Mr. Schulz at his residence and office.  John was very much impressed when arriving at the horseshoe driveway with an appropriate name, something like, Peanuts Lane.  Mr. Schulz’s home was situated between two additional homes one on either side of the horseshoe drive.  Mr. Cotey was told the two extra houses were residential quarters for his parents and in-laws.  This revealed the true generous character of Mr. Schulz.  After a most welcoming introduction they got down to the business of applying the Peanut characters to an old toy bus.  Mr. Schulz loved the idea but remained adamant about protecting the final renditions of his Peanuts characters by remaining responsible for the final artwork.  This presented a technical problem due to the plotting method used to reproduce desired images on formed sheet metal.  This meant the characters had to be drawn in a seemingly distorted manner in order to reproduce the final character as Mr. Schulz intended. 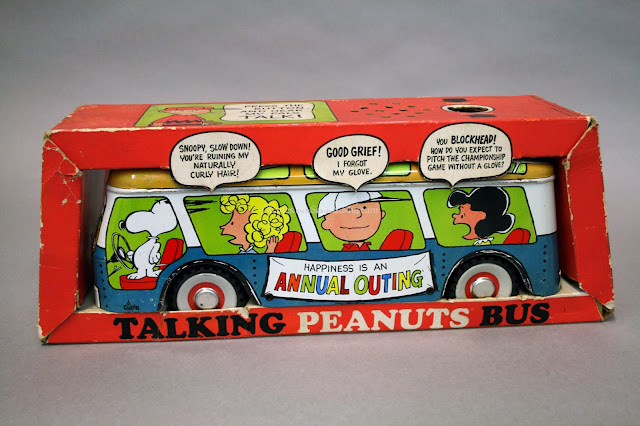 As Mr. Cotey was leaving, he asked Mr. Schulz if he would mind giving both John and I his personal autograph.  He reassured John that he would have been hurt had he not asked.  His statement exhibited still another genuine character of Mr. Schulz.  He made a quick sketch of Snoopy sitting on his dog house for both John and I and signed it with his best wishes.

We contacted Mr. Schulz once again to help promote other products of ours by utilizing the Peanuts characters.  This responsibility was out of my hands and had to be controlled by Mr. Cotey as my time was dedicated to creating an affordable record player for the new, “Talking Peanut Bus”.  We found ourselves short of time to complete the project.  We all worked overtime and through family holidays in order to complete the project.

J. Chein employed the services of a number of competent commercial and illustrative artists that had become quite familiar with the required distortion technique.  Because Mr. Schulz was not familiar with the distortion technique, we had our artist, Woody draw the desired characters on a formed prototype in our suggested positions and sent it to Mr. Schulz for review.  Abiding by Mr. Schulz request to oversee the final artwork, Mr. Schulz sent us his finished drawings of the characters as positioned on the prototype.  Woody transferred Mr. Schulz’s artwork by plotting the characters onto a sheet of grid lined illustration board and completed the camera ready artwork was.  The resulting images are distorted when seen on flat printing plates.  The system is identical to plotting the longitude and latitude of a continent on a flat map from a spherical globe.

I am personally very proud of the resulting record player design.  By applying the basic principals taught to us by Mr. Thomas Edison when he invented the cylindrical recording system for his Phonograph, I was able to duplicate its complete functionality and quality of sound.

We were informed by Mr. Schulz that CBS recorded the Peanut characters voices for prior TV shows.  In contacting CBS we were able to retain the same young actors whose voices were heard each year on the presentation of the popular Charlie Brown’s TV Christmas Show.  We went to CBS in New York City to meet with the actors.  CBS recorded and cut a special 3 inch diameter record using an 8 sound grove tracking system.  The multiple grooves gave better odds for the needle arm to find a different sound groove with every push of the operating button.  This allowed different messages to be heard with each push of the button using only one record.  In addition, I asked CBS to cut the sound grooves vertically rather than the customary horizontal manner.  In this way I was able to achieve the same quality sound made by Thomas Edison’s phonograph.  The resulting vibrations forced a vertical movement of the needle arm that transferred the sound vibrations to the plastic speaker.  What seemed most impressive to me was being able to clearly hear high quality sound of the youth’s voices coming from a little toy record player.  It must be brought to mind, with the exception of a battery operated motor, there were no miniature electronics.  The Talking Peanut Bus was a complete mechanical toy.

The sound system’s direct cost was $.19 cents each which included the electric motor.  The turntable was turned by means of a soundless rubber “O” ring.  After the product was introduced, we had many calls from a variety of businesses asking us to sell the record player so they could apply it to their products.  This could not be done easily because half of the housing was injection molded plastic the other half was the old sheet metal bus.

I had one of the Peanut buses at home for many following years.  No matter how often the red button was pressed, the resulting sound was always an unexpected high quality voice.
It’s amazing that box held together almost a half century.  At the time, this box was considered very unusual because it displayed the entire item.  In fact, it was so unique that J. Chein & Company was given a patent on it. 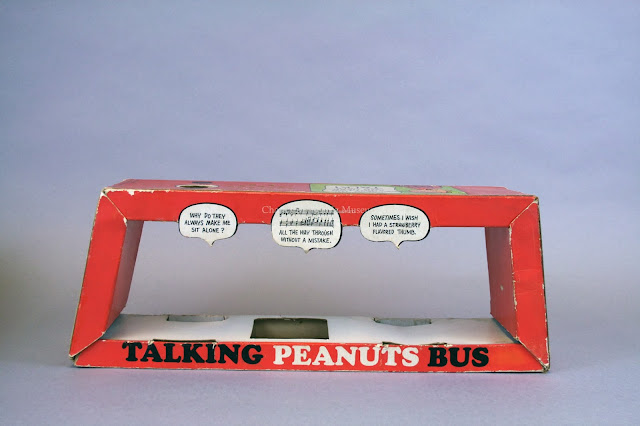 My dearest friend, Mr. John Cotey passed away a few years ago.  We made a great team because we thought alike and had complimentary abilities.  The world needs more men like him.

The photos of the Peanuts Bus are used with permission from the Charles Schulz Museum in Santa Rosa California.  Please go visit them in person or on line at http://schulzmuseum.org
Posted by Vero's son at 2:34 PM